In addition to license activation and deactivation, there are many other ways for your software to communicate with SOLO Server Automation, which can help you better maintain control of your licensed software and even integrate with other systems. These calls/requests to our license server are called API Transactions and we charge per transaction.

What is an API Transaction?

All licensing client function calls or web service calls to SOLO Server Automation are considered API Transactions. The exception is activations, which are billed separately at a different per activation rate.

Examples of billable API Transactions include:

All requests made to our servers to process license activation, license deactivation, and license transfer are NOT billable as API Transactions, as these are the core services covered by the activation fee.

Examples of non-billable API Transactions include:

Note that product activations of Test Licenses are not charged an activation fee but would be counted as a billable API transaction.

What is the cost of API Transactions?

The included amount of API Transactions is enough for most standard use cases, so you shouldn't expect to have any overages. If you do have overages, the rate is $1 per 1000 API Transactions.

In some cases, such as when using our Cloud-Controlled Network Floating Licensing, you may need a high volume of API Transactions, so you can purchase these as add-ons to your monthly SoftwareKey plan. The add-on purchases are:

How do I estimate how many API Transactions I will need?

For example, many function calls are configured to recur periodically, so you can adjust the frequency of these calls:

For Cloud-Controlled Network Floating Licensing, an API Transaction occurs each time a user opens a new session or polls their current session. You have control over the polling frequency, and if you have a large user base and short frequency, this can result in many API calls to our server.

For example, if you issue a 100 user license with a polling frequency of 30 minutes, the estimated maximum API Transaction usage (assuming 8 hours of usage per workday by all users) would be:

What will my total monthly fees be?

The following is an example of an account on our Team Plan, which costs $99/month and includes:

In a month, If there are 80 activations processed and 10 deactivations, that would result in 80 total activations. This would be 5 activations over the included 75:

Each calendar month the usage resets, and the activation and API Transaction count starts at zero.

If you are having significant overage fees, it is to your advantage to upgrade to a plan that includes more Activations and API Transactions compared to paying the overage rates.

How many API Transactions am I currently using?

If you already have a SOLO Server account, go to the menu  Reports and choose the Monthly Statement and Account Usage report.

You can view the HTML summary of your usage, including the total number of API Transactions processed through your SOLO Server account. Here is an example of the HTML summary: 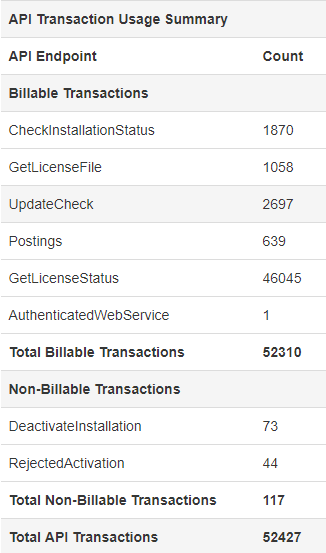 While the report allows you to display the counts for the date range you selected, accurate reporting for all SOLO Server API endpoints starts in January 2019.

The SoftwareKey System provides many licensing services through calls/requests to SOLO Server Automation, and we use a simple usage-based pricing model to charge for these API Transactions.

Did this answer your question? Thanks for the feedback There was a problem submitting your feedback. Please try again later.